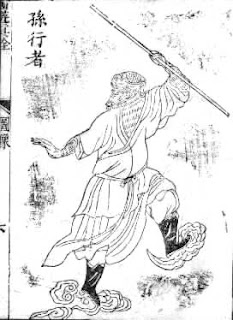 Wow, Part B was quite the ride. I definitely felt like there was a lot going on. I wish, in both parts, that there were fewer stories and more details to each one.

I think my favorite part was when he was finally taught his lesson. Obviously, it sucks that it took him being locked up for 500 years (did he have food???), but I thought that part was good.

I also felt like all the times he was like deceiving the gods and especially the Lord of the Heavens was kind of weird because I would think that they wouldn't be able to be tricked like that. I just felt like it was all too easy for him.

I don't really think I will use any of the material from this part for my retelling, I like the ideas from the first part better. 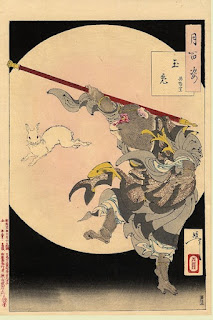 (The Monkey King, by Yoshitoshi)

This week I decided to read The Monkey King unit. I went ahead and read it all at once and it was so interesting! I really enjoyed it and am excited to do my own retelling.

This unit was a bit overwhelming just because I felt like so much happened in such a short amount of time.

I think my favorite parts in Part A were when Sun Wu Kung was being taught by the saint because I think he seemed the least conceited here. Until of course he wouldn't stop asking about immortality.

I also think that some of the story was confusing and that it could be better understood by someone in the culture at the time, or at least someone more familiar with the culture and traditions. I didn't understand why he was made of stone. How did he even move?

I also liked the parts where he was in the dragon realm, just because in a book series I've read that incorporates Indian mythology the five dragons were part of one of the books so it was cool to see something somewhat familiar though still different.

I think in my retelling I will use the time spent with the saint and have things end differently. I think I would like it better if Sun Wu Kung realizes he doesn't need immortality and moves on from that. 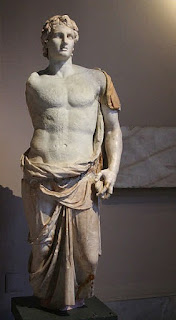 Alexandria: I chose to start with this Wikipedia page because while on the class website I know noticed a RT in the Twitter Stream about some objects that had been recovered from ancient Alexandria. It said that part of the city had gone underwater, and I'd never heard about that so I decided to check it out. I had to read the ancient section of the main page.

365 Crete Earthquake: I was led to this page because I found the reason some of those artifacts were underwater was because of a tsunami that devastated the city in 365. It was caused by an earthquake whose epicenter is estimated to be Crete.

Arian controversy: Finally, I got here because the previous article talked about how Marcellinus was not a Christian but tolerated them. The controversy was over whether Jesus was fully man, fully God, or both. The trinitarian view won out, and is still supported by most Christians today.
Posted by Jana Allen at 10:17 AM No comments: 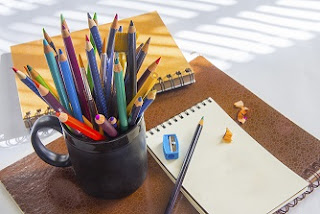 Source
I am going to do the Happiness Jar challenge this week as part of the Learning by H.E.A.R.T. for extra credit. I plan to write something down every day in my notebook that made me happy that day.

I will update in a week with how it went and what things I wrote down!
Posted by Jana Allen at 5:07 PM No comments:


What is at least one thing that the article CONFIRMED for you that you knew already?
What is at least one NEW thing that you learned that you did not know before?
What is the one thing you are now CURIOUS to explore (i.e. something you want to try in your life, something you want to research and learn more about, etc.) and what are you going to do in order to act on that curiosity?
Posted by Jana Allen at 4:33 PM No comments:

So I just tried the browser typing tech tip, and it's cooler than I thought. Usually I prefer Google Docs to type in, whenever I need to write down notes or anything. But also when I need to type something immediately I will use the Notes app on my phone.

I think I could use this sometimes just to have a big space to write in, but we will see.
Posted by Jana Allen at 12:08 AM No comments:

1. Am I happy with my progress so far? Honestly, no. I have been falling behind these last few weeks, and I don't think there's been a week where I was able to finish all of the weekly assignments. I'd say I'm most proud of my story, "The Downfall of Jupiter," and my choosing of "The Valkyrie" by Richard Wagner for my storybook. I do not have a good weekly routine, though I feel I did at the beginning of the semester. It has been hard to motivate myself to get things done for this class early, and oftentimes I miss the deadlines. I would say I enjoy the readings the most, though it is sometimes difficult for me to get myself to make the reading notes post. I have used some of the extra credit options but have not tried them all.

2. For the next half of the semester the changes I want to make are to make sure I'm getting not only the weekly assignments done each week but also a lot of extra credit. I will really have to put some effort into this, and actively choose to work on this class rather than have downtime. 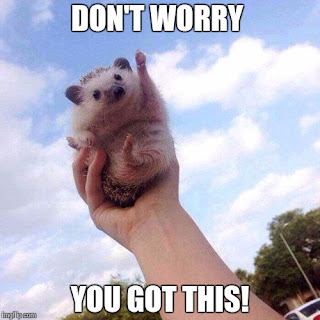 Posted by Jana Allen at 4:53 PM No comments: